The Philadelphia Rose Society (PRS) serves Philadelphia, Bucks, Montgomery, and Delaware Counties. An affiliate of the American Rose Society, we meet at 1pmEST on the second Sunday of April, May, September, October, November, and December at the Morris Arboretum in Chestnut Hill at the Horticultural Center in Bloomfield Park on Northwestern Avenue. There is no admission charge. See our Events Page for details. (Zoom meetings in 2022, unless otherwise noted.) We welcome new faces and all/any rose questions!

Under the sponsorship of the Philadelphia Rose Society, the Home Gardeners’ June Rose Festival was held in Gimbel Brothers store on June 11 & 12 (*1947) with over 35,000 people attending. Participating in the festival were general garden and plant life groups, private clubs, a department store, public rose gardens, private gardens, arboretums, commercial firms, schools, colleges and universities, representing three states and over 25 communities.
Of the 200 rose varieties listed, over 6500 blooms were exhibited for which 150 awards were given.  One person displayed 1000 roses of his own growing.  The festival was staged in all details by housewives who are amateur rose growers and who had never managed any such showing before.
At the June 12 meeting, Dr. R.C. Allen, Secretary of the American Rose Society and later became President of ARS, presented a lecture, “Modern Trends in Rose Growing” which was greatly appreciated by everyone.

With its President Robert H. Kraeger at the helm in 1959, the PRS held its first National Convention. Then in 1967 the Philadelphia Rose Society and the Delaware County Rose Society were co-hosts of a National Rose Show and Convention on September 14,15, 16, & 17th at the Benjamin Franklin Hotel in Philadelphia.  Daniel R. Long was PRS President. Below, publicity from the Delaware County Times: 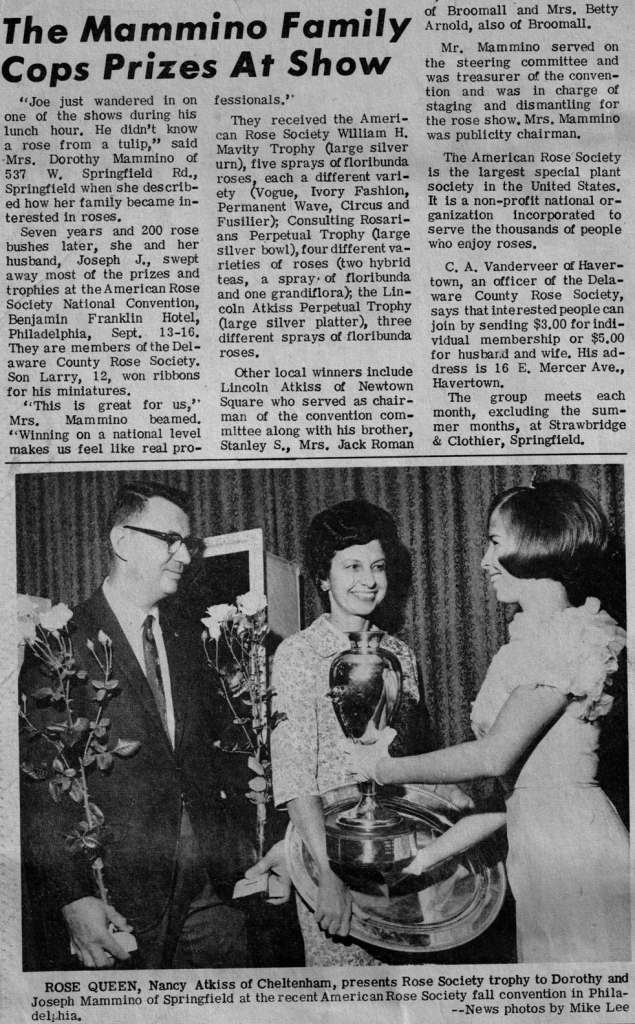